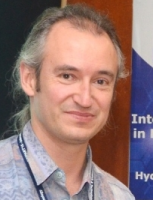 At the METAL´19 conference Daniel Gaude-Fugarolas will present an invited lecture at the session F.

He obtained the degrees of Industrial Engineer (i.e. Manufacturing) and Materials Science Engineer (both as M.Eng.) at the ETSEIB faculty of Universitat Politècnica de Catalunya. He completed a Master's Thesis at Lulea University (Sweden), within an Erasmus program.

On 2003 he obtained a Ph.D. at Cambridge University (UK) under the supervision of Sir Harshad K.D.H. Bhadeshia (Physical Metallurgy). In an altogether different discipline, he later obtained a Degree in Egyptology at Museu Egipci de Barcelona/Fundació Clos (Barcelona).

He has enjoyed ample international experiences, both professionally and as an independent traveler. He has worked in prestigious organizations like Cambridge University (UK), Universite Catholique de Louvain (Belgium), the Commissariat de Energie Atomique (CEA Saclay -France), Lulea University (Sweden) and Universitat Politècnica de Catalunya (Spain). He has also visited about 30+ countries in 4 continents, professionally or for leisure, including having lived substantial time in 5 of them, always enjoying and learning from their cultures and values. He is fluent in four languages.

During this time he has obtained about 20 years of experience in industrial and academic research in physical metallurgy (mainly on steel) and modeling techniques, in areas related to automotive, aerospace, welding, and nuclear industries. He has published a number of scientific publications in those fields, as well as obtained a set of patents including a method to reduce hydrogen embrittlement on metal alloys.

He is the founder and CEO of his own company (dgaude Prime Innovation SLU), that develops science-based innovation and at present he combines that with teaching at the Universitat Politècnica de Catalunya, as Professor Associate (associated lecturer). His present teaching includes:

He is Fellow of the Cambridge Philosophical Society (and alumnus of Corpus Christi College (Cambridge)) and Universitat Politècnica de Catalunya (Spain)) and member of TMS, as well as a member of the Catalan Engineer Society (Col.legi Enginyers Industrials de Catalunya). Similarly, he is a full member of the Egypt Exploration Society (UK).

He participates in the Scientific Committees of International Conferences like FIMPART (Hyderabad, India, 2015; Bordeaux, France, 2017) and CMEME (Biskra, Algeria, 2015). He also coordinates the Innovation Management sub-commission at the Catalan Engineer Society.

At the moment, he is developing a project applying machine learning techniques into the study of Ancient Egypt archaeological items.

Present topics of interest include: